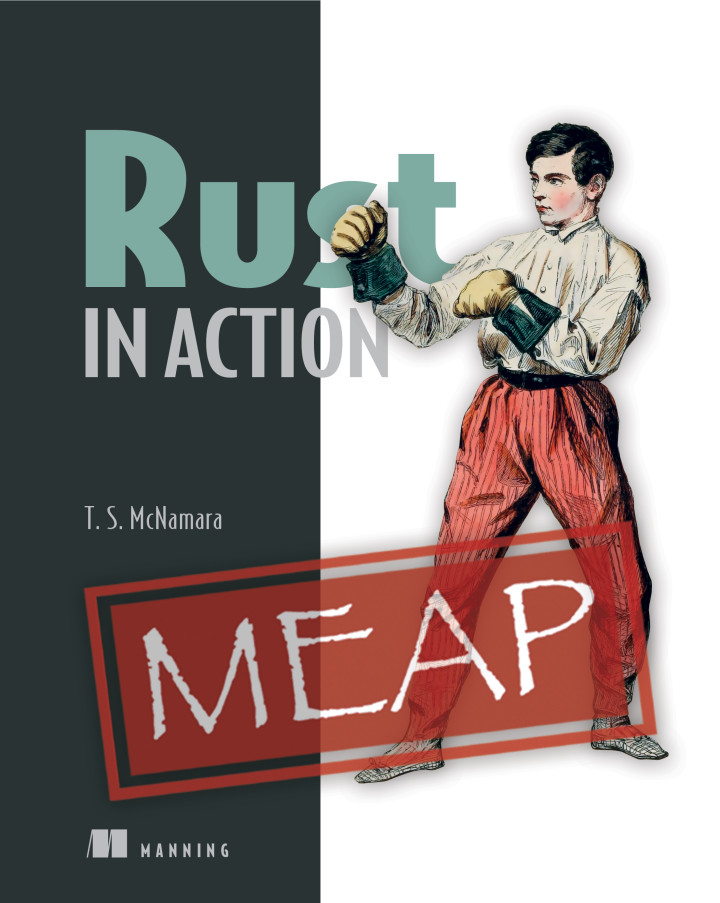 Rust in Action is a book for intermediate programmers who want to explore the world of the Rust programming language. It's intended for people who may have exhausted the free material on the web, but who still want to learn more.

Rust in Action is different from other material on Rust programming because it also teaches you about systems programming along the way. You'll be able to learn more about how a CPU works, how computers keep time, what pointers are and how your network card and keyboard tell the CPU that they have input ready to read.

It’s actually unique from the point of view of systems programming books too - as almost every example works on Windows!

If you are the kind of learner who enjoys worked examples, you'll enjoy reading this book.

Rust in Action introduces the Rust programming language by exploring numerous systems programming concepts and techniques.You'll be learning Rust by delving into how computers work under the hood. You'll find yourself playing with persistent storage, memory, networking and even tinkering with CPU instructions. The book takes you through using Rust to extend other applications and teaches you tricks to write blindingly fast code. You'll also discover parallel and concurrent programming. Filled to the brim with real-life use-cases and scenarios, you'll go beyond the Rust syntax and see what Rust has to offer in real-world use cases.

Reading the MEAP version every now and then and loving it! Topic selection and writing style really appeals to my personal taste. Thanks for doing the hard work, you rock!
— /u/asmx85

Yeah, I can vouch for this. It's really good! Especially the examples used. I'm amazed about the amount of thought that has gone in to them.
— /u/cfsamson

What I most like about it is that the examples are complex enough to teach you to solve real world problems.
— @matthewrudy

I just read the chapter, and it was fantastic! I'm looking forward to the next MEAP update!
— @asmeredith

Also, an upcoming "Rust in Action" from @timClicks is a fantastic experience. One of the best books and text, I read.
— @em0uquae

.@timClicks book Rust in Action is a must read for an in-depth understanding of how things work under the hood. So far the MEAP chapters are really good. Hope to see similar quality and depth in upcoming chapters. Great work.
— @nimtiazm

I am quite eager to get the book because i have read the parts already available and its without a doubt one of the best i have ever read.
— /u/asmx85

I purchased this book a few months ago, and I can say that it is worth the price, even just for the chapters which have already been released. If you are looking for something to follow up with after you've read The Rust Programming Language (the book) and/or Programming Rust, this is it.
— /u/JoshMcguigan

Rust in Action is probably the most practical and engaging intro to Rust that's out there.

Rust in Action is really, really good. It's only a MEAP right now but it's worth it!
— @sincerely_tegan

Some of the projects in the book

Readers work through dozens of examples scattered through the book. Some of the larger projects include:

Great work for making it this far down the webpage! Here's a discount code: slmcnamara. Add the book to your cart and apply it at the checkout for a 42% discount. Oh and if you’re based in the USA, shipping for the print book is free.

Use Manning's liveBook feature to read chapters for free.

Use Manning's website to buy DRM-free eBook and print versions.

A few readers have public repositories where they have worked through many of the code examples: